Bloomer and Moore, in Body, Memory and Architecture, suggest that what is missing from dwellings today are the potential transactions between body, imagination and environment. Light Arrays provide a way of thinking about these transactions from an experiential, as well as visual, perspective. They allow us to enter, understand and experiment with our non-observational relationship to space. Echoing Merleau-Ponty’s claim that the paintings of Cézanne “make visible how the world touches us,” the Light Arrays make visible how our gestures touch the world.

In the initial experiments (Light Arrays), three theatre artists, adorned with a range of lasers and LEDs, undertook freeform movement experiments, responding instinctively to the light-based extension. Their explorations pointed to two lines of research:

With Alvaro Cassinelli at The University of Tokyo, we identified, investigated and pushed beyond the initial results to develop three garment/interfaces: the laserSpine, the in-visible skirt, and inertiaLEDs. We iterated these interfaces through a multi-tiered design-choreographic process with and for choreographers, Alessio Silvestrin and Kentaro!!. The collaboration with Kentaro!! and Silvestrin was commissioned by, and presented at The 3rd Yebisu International Festival of Art and Alternative Visions, which took place in Tokyo, Japan, 18-27 February, 2011. The commission also included an interactive stage set, Corasen 光らせん, that doubled as an interactive installation for public use throughout the day.

A belt with six evenly-spaced motorised laser modules and an independent controller, which sends and receives movement information to and from the belt. When activated, the “skirt” gives the suggestion of a striped A-line skirt, which can move in response to the controller the way a skirt might move in response to body movement, or other external factors. The controller may be worn by the wearer of the “skirt” or by another person, opening up the possibility of an extended body. The belt may also be removed from the body and placed on the ground or other surface. In this situation, the “skirt” seems to behave like an organic creature. The qualities of the movement responses of the “skirt” to the controller may be programmed to be gentle and flowing, staccato, or anywhere in between, as appropriate or desired. For the in-visible skirt and other imaginary things the two choreographers had identical skirt interfaces, with radically different behaviours. These behaviours emerged from their respective design-choreographic processes. 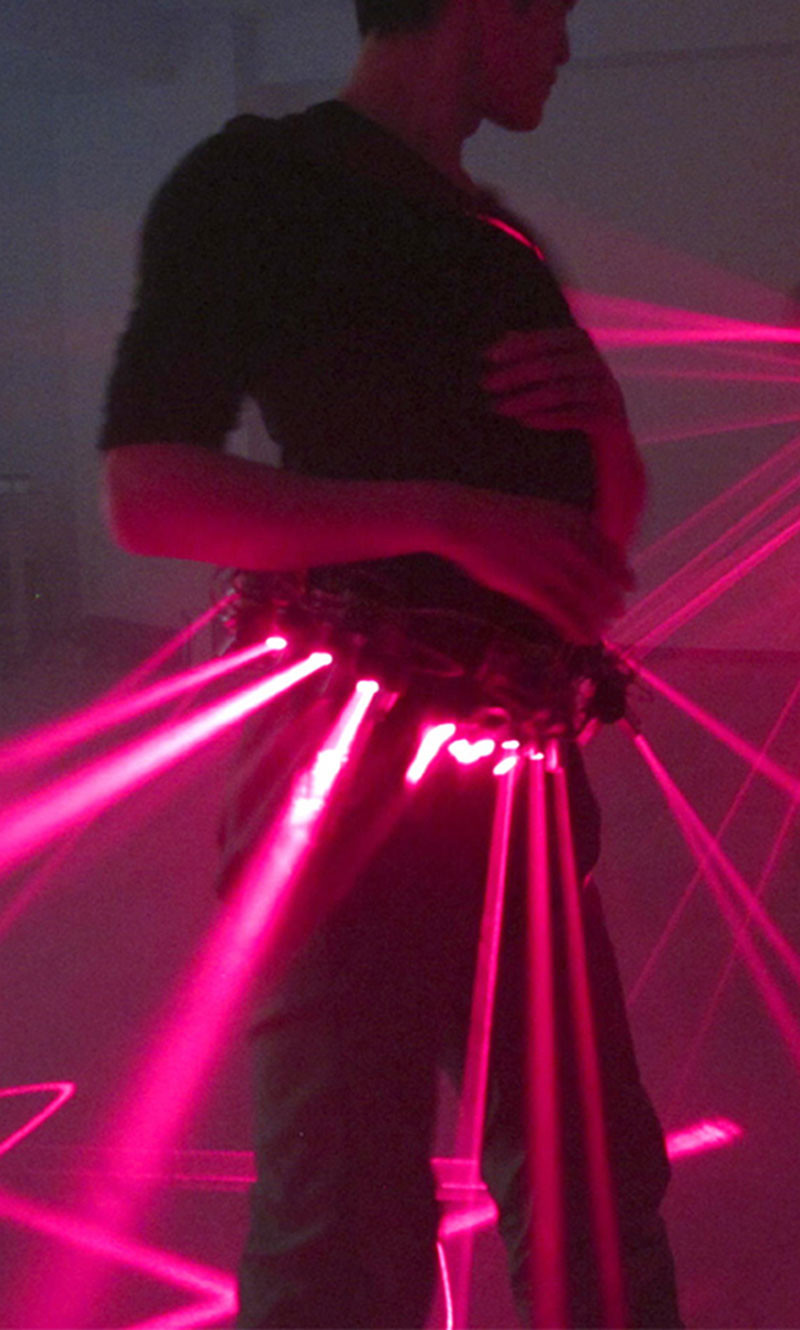 A garment with lasers that project perpendicular to, and down the length of the spine. The complex technology in this interface is the body. Though it is not always evident, the range of movement of the spine is remarkable. Magnifying and making visible the relative position and dynamic tilt of the spine is sufficient to bring attention in an intense and unique way to this part of the body. That the wearer of the garment cannot see the lights projecting from their back serves to intensify this focus. The whole seems to enhance the poetic valence of movement of the entire torso, with the spinal column demarcated as the experiential, physical and energetic core. Adding additional complexity through technology seemed redundant. 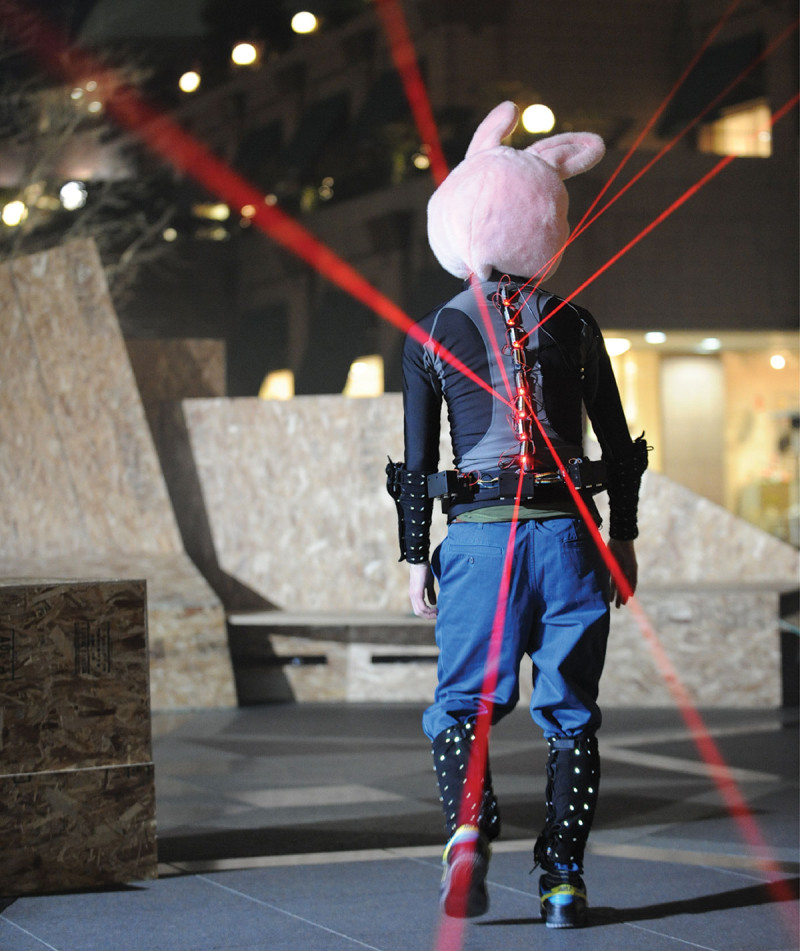 Arrays of LEDs sewn into garments & modules that incorporate custom electronics programmed so that the lights may reflect and respond to body movement through time. Different iterations include a front-of-torso array, and forearm and lower-leg bands. The hand-sewn LED arrays are controlled with Arduino microcontrollers, using movement and position data from an accelerometer and/or gyroscope. Each light is controlled independently, and can be operated so that a single light, or groups of lights seem to spiral around the arm, leg or body, bounce or respond in other ways to movement and acceleration. A number of different behaviours were programmed into the different garment/modules, which can be cycled through at will. 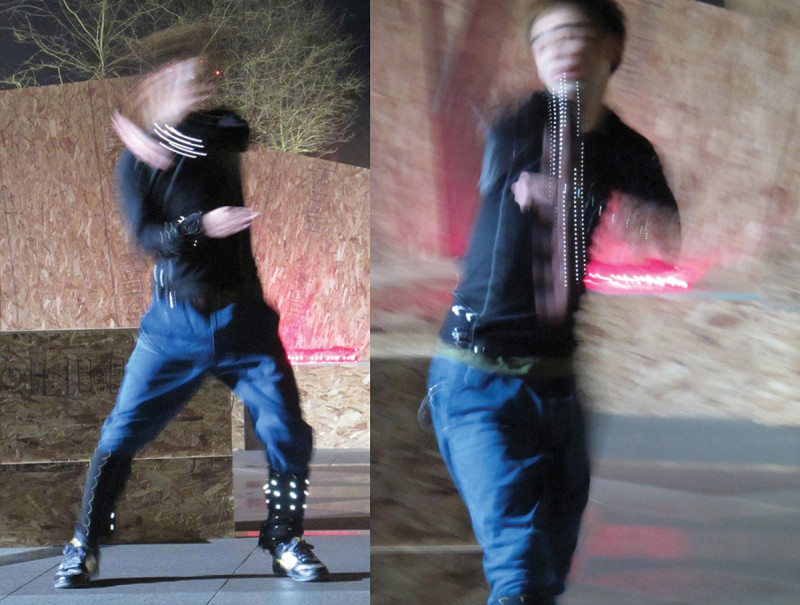 A collaboration with Alvaro Cassinelli
Commissioned by the Yebisu International Festival of Art and Alternative Visions
Presented at Yebisu Garden Place Central Square and The Tokyo Metropolitan Museum of Photography in Tokyo, Feb 2011
Curated by Hiroko TASAKA