The PKI project tries to understand how to give people the feeling of being in someone else’s body, someone with different physical abilities and constraints. […]

Green Knits, Blue Cushions and Sleeves emerged from a crafted research inquiry. These probes invite the public into considered engagement of the ethical, social, personal, political and cultural implications of the PKI project. To date, they have been tested at a Lab in the Wild participatory exhibit at The National Gallery of Victoria, International, in Melbourne Australia […]. This page provides an overview of the PKI Phase I probes.

Following are detailed descriptions of each of the probes, for more info, see the associated publications, listed in the colophon: 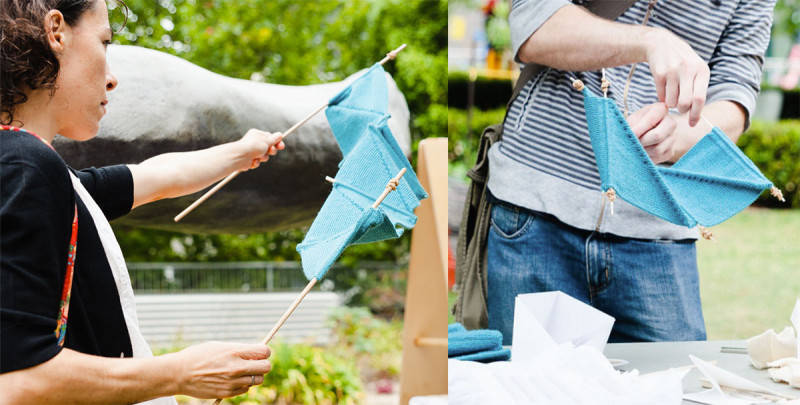 The intention of the Green Knits is to enable participants to ‘feel’ a particular movement by prompting them to make that movement. The knits leverage the inherent ‘soft’ logic of different knitted stitch architectures, such as the shift between the balance of an all-needle rib structure to a single jersey, which results in a natural fold: a form with an internal memory.

Complex forms of fabric origami were developed to form the Green Knits, taking inspiration from tensegrity structures: structures that maintain a stable integrity through a set of discontinuous compressive elements, and a set of continuous tensile elements. The results act as a guide to lead participants through a relatively simple movement such as of two hands coming together and moving apart in a spiraling form.

The Blue Cushion prototypes work with the body’s capacity to enable or disable its own affordances, by acting on mechanical, cognitive and sensory elements of the body. Each cushion serves as a pressure point to shift posture or stimulate nerve paths and send messages to the brain. Significantly, they don’t noticeably change the way a person moves from an outside perspective. Rather, they shift perception of movement, bringing reflection to internal changes – as with the Feldenkrais Method, they change how making a movement feels. There are currently four cushions-sets that function as follows:

The Sleeves mechanically impact freedom of movement, coherent with a range of physical pathologies. They were particularly inspired by choreographer, Benjamin Hancock’s, explorations using hypermobility to segment the body.

Significantly, we have discovered that it is the least resolved prototypes – the Knit Structures – that serve as the most accessible entry point for a broader research dialogue. The openness seems to draw people in who might not otherwise engage, gives permission to make suggestions and triggers the imaginings of possibilities. The unresolved prototypes have also become an important point of entry for the more highly resolved, and seemingly challenging works, such as the Sleeves, which must be worn. In doing so, they enable a greater range of participation with all three design frameworks.