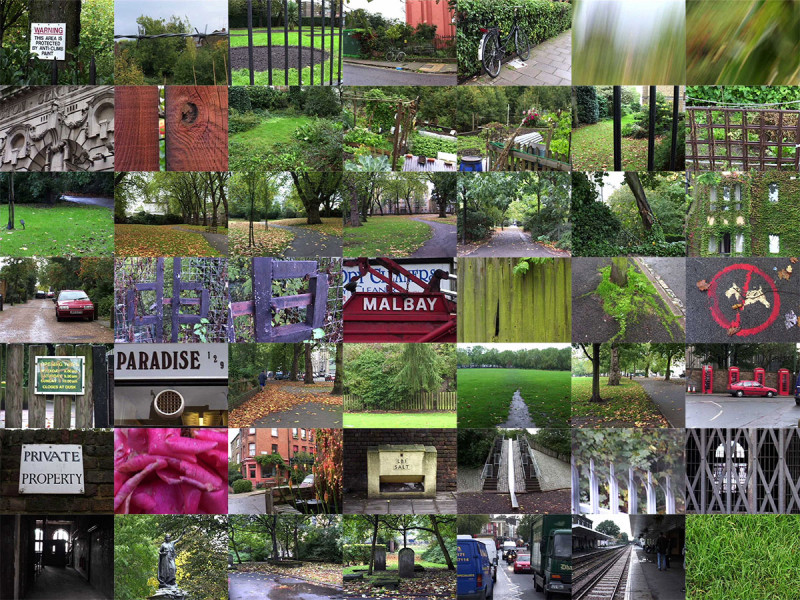 highbury sounds is an interactive installation designed to give people the experience of finding space within the noise of the city. Created in response to an area of London represented by a single grid square of the map – Highbury Islington.

My first impression of the area was of noise and movement. Overground and subway trains meet, there is a lot of heavy traffic, and planes are constantly flying overhead. As I moved off the main street I was struck by how green everything was – moss on fences, ivy over buildings, lots of parks, lush overgrown gardens and green spaces. As I stood still the noise of the passing traffic seemed to fade into the distance, somehow I could hear the silence in between all the noise, and out of this silence emerged the sound of the birds singing and the gently falling rain…highbury sounds is an attempt to create this same sensation for the user.

Highbury sounds takes place in a room filled with leaves. As the viewer enters they are given a “map” of highbury islington – a blank sheet of card folded like a typical road map. On entering the space and rustling the leaves with their feet, a cacophony of souds recorded in the area – made up of a collage of trains, road traffic and low-flying planes passing overhead – plays very loudly in the space. At the same time images of the area are projected from above in quick succession – the viewer is able to catch glimpses of these images on their “map”, but not to distinguish clearly between them.

By standing still, and not rustling the leaves, the viewer is able to view “in between” the noise and movement – the cacophony of traffic sounds dissipates leaving the sound of gently falling rain and birdsong, and the images are projected at a much slower pace – allowing the viewer to peruse them at their leisure.