Compendium was designed specifically for a museum or gallery context. It has also been suggested that the formality of the simply framed screen and its grid-like structure would be ideal for an architectural environment.

The aim with Compendium was to create a playful interactive installation which inspires reflection upon the nature of non-verbal communication.

Based on the structure of a traditional slide-puzzle, the Installation consists of a suspended screen divided into a grid of twelve rectangles. Eleven rectangles display black and white video close-ups (head and shoulder shots) of different subjects, whilst the twelfth rectangle is blank space. 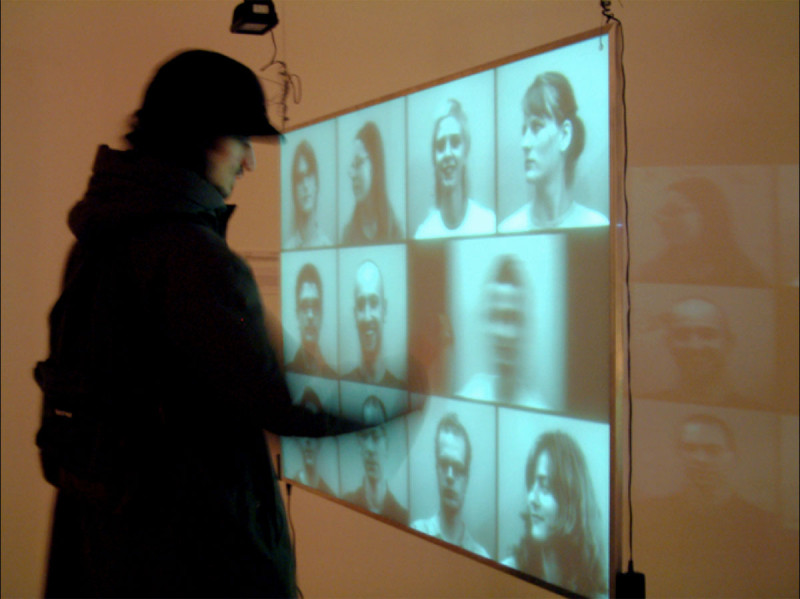 The subjects displayed on the screen were taped performing a theatre exercise in which they were required to respond to a series of prescribed instructions. The exercise directs the performers through a sequence which requires them to switch back and forth between a forward-facing neutral face, and a set of expressions which they adopt and then “pass on to” the person seated beside them. The sequence progresses through seven expressions, building up from a cold look to fully engaged laughter.

The interaction in compendium is affected by stroking the faces of the video characters. When the position of the chosen character is next to the vacant space, the chosen video will slide to its new position. While the video is moving to its new location the remaining video clips are paused. As a result, with each change in the spatial relationship between the characters on the screen a temporal change is also affected.

Compendium invites reflection upon the nature of non-verbal communication, as nuances of expression and emotion are affected and passed on from one protagonist to another. The changing relationships between the various characters suggest the unpredictability of determining the cause of each affected expression.